Story: Assassin’s Creed 3 is the 5th installment of the bloody, violent, stealthy, action-packed Ubisoft series we all know and love. Unlike the earlier Assassin Creed’s games, this game takes place in America rather than Europe. We’ve finally ditched Ezio and now the fans of this series get a new story to grow to love. The story of Assassin’s Creed 3 takes place during and after The American Revolution (1753-1783). The game starts off with you playing as Haytham Kenway a British gentleman, this I found to be quite a drag because after seeing all the amazing trailers all I wanted to do was kill some red coats. I couldn’t stand playing as him however he does tie in the story very fluently and some pretty significant things occur while in his sequence. When we’re done with him we get introduced to the assassin, Connor Kenway.

Connor is a half English, half Native American boy. Without me spoiling anything for you all, let’s just say something happens that makes him don his hood and start partaking in assassin activities. I will give the developers credit in the fact that they are historically correct for the most part; major historical figures are referenced and even shown throughout this game such as George Washington, Sam Adams, Benjamin Franklin and Thomas Jefferson. The British are essentially beating up on the colonies and George Washington has had enough, he rallies the colonists and they begin to fight back against the British. George Washington and Connor cross paths ultimately and an alliance is formed from two unlikely friends. Throughout the game I found myself in awe at how amazing some of the missions were, I felt immersed in this colonial world and I believe you will too.

Meanwhile in reality this whole story is being seen in the Animus by Desmond Miles. Desmond and his cohorts have re-located to a cave in New York where Desmond will experience life in the colonies, learning from Connor all he needs to stop the evil Templars from wreaking havoc upon the world. Desmond’s sequences are quite boring to me but the very last sequence was enjoyable and creative. Overall the story is very well done; there are minor inconsistency’s that spoil a few moments in which you can tell the developers were trying to create a serious cut scene. 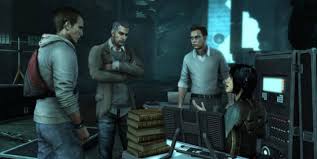 Desmond conversing with his friends on how they are going to save the world.

Gameplay: Assassin’s Creed 3 in terms of gameplay is very fluent and the new engine, “Anvil Next” is a complete overhaul of the old games. It’s a very crisp new engine, a new set of attacks, assassinations and takedowns are at Connor’s disposal and it’s just down right kick ass. You can notice the difference between Ezio and Connor’s attacks right off the bat. The combat system is incredible. The graphics are really clear and the open world scenery is simply fantastic. I found myself just exploring  snow-covered fields, villages, the high seas and even the streets of Boston, the only drawback is that certain areas are blocked off early in the game and you go literally hours without being able to access them. Once all areas are accessible, the maps of AC3 are insanely huge, it’s not quite on the scale of a Grand Theft Auto IV or Red Dead Redemption, but the size is very robust.

To prolong this game the multiple side-missions and irrelevant tasks keep you busy and I recommend you all do them because AC3 is significantly shorter than all the other AC games. There are the occasional 5 second freezes and screen tears but it’s nothing that bad that stops me from resuming play. The huge issue is the lack of a soundtrack and the void in the audio department, there are times in the game in which the streets are quieter than a funeral home and the horrible lip syncing during the cut scenes reminds me of a low-budget  Japanese film. Ubisoft needs to fix that issue fast but i’m sure a resolution or patch is coming soon. Overall the gameplay is very good, a few freezes and glitches may defer you from playing for a few seconds but it’s a small price to pay for such an enjoyable game. 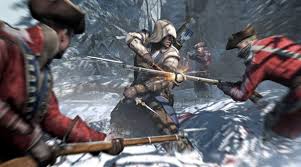 Multiplayer: The multiplayer is downfall of Assassins Creed 3, there are 12 modes that can be played. Many of them are your standard, Domination, Wanted and Co-Op. I personally do not like the multiplayer in AC3, but I’ve asked over 20 people and the verdict is that the online is enjoyable but it seems so out of place for a game in which single player is the main focus. The purchase system for weapons and items is a pain in the ass because in AC: Brotherhood you have to purchase them as you level up, and for every character you get the item you bought isn’t accessible for every one you have. You get that item for only that character. Overall I don’t really like it due to the repetitiveness. It’s original no doubt, but at the end of the day it’s just a sophisticated Hide-N-Seek with some new modes we get standard in every game with an online capability. 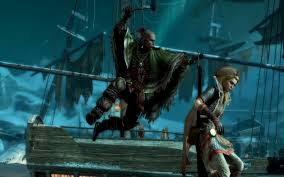 One response to “Assassin’s Creed 3 (Review)”