Story: Madden 13 has no story, but it has career mode in which the player goes through, can win playoffs and Super Bowls.

Gameplay: Madden 13’s new physics engine is amazing. I really do like the direction in which EA is going. That being said I have some pretty huge grievances. When passing the ball, the quarterback doesn’t throw it up in the air (like the real NFL) but it’s rather a line drive that can be picked off by Lineman and even people that don’t aren’t even in the position to make the play. Madden 13 is quite the most advanced madden yet, but at the same time it is the most stiff. The running feels so restricted and the passing game just feels so unrealistic. Speaking for sports fans everywhere, this is the most disappointing part of the game. I really was sad that this game has such an advanced engine but the fun that was once Madden has been tainted with overly realistic gameplay. The running game is the most stand-out part of Madden 13, this is how realism is done. It’s not so simple to hit the gap to break a 20+ yard run but when you do, it is rewarding. The graphics on Madden 13 are great, the faces of players and coaches and coaches match those of the real life people. The only downfall is a lot of freezing and there a screen tears left and right. And am I the only person who noticed the players catch narcolepsy when the play is done? It makes for a good laugh but it takes away from the seriousness of the game. Overall Madden 13 isn’t HORRIBLE but it’s not amazing either. 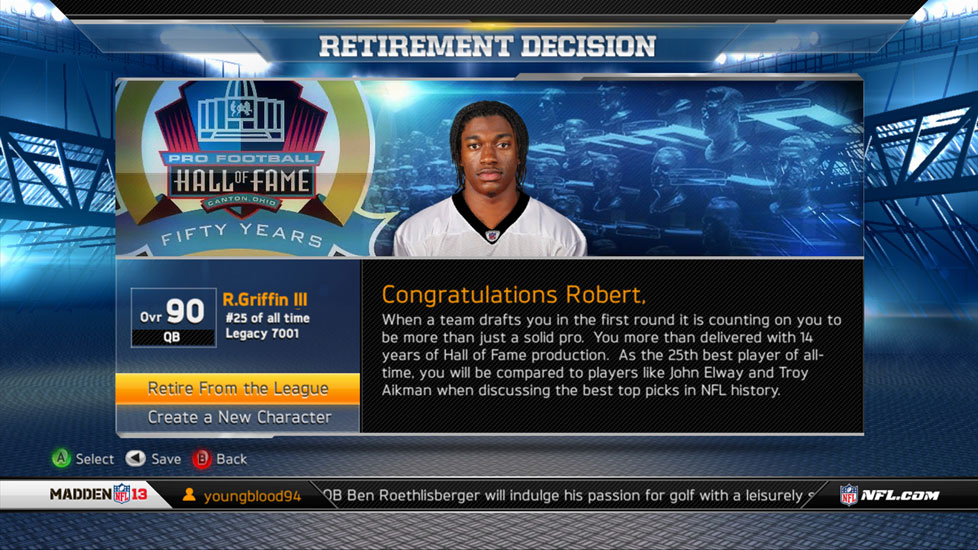 Multiplayer: Online offers 2 modes where you can team play or face off in a random game or a friend can play you. The servers are complete trash to me. I was disconnected from countless games and the amount of games I was “banned” from was ridiculous. Overall I say avoid multiplayer but if your connection is immaculate, by all means, be my guest. The Verdict: I give Madden 13 a 6/10, I wasn’t liking this game at all and not to bash EA but it’s not necessary to release one of these every year.