Greetings from Guns of the Helghast. March 1st, 2013, we enjoyed another fun-filled Friday activity hosted by our commander, Sons-of-Helghan.

Guns of the Helghast steered our starships towards the LOOT Space Station for this Friday’s gathering.  The purpose of this visit, aside from having fun, was to offer our gratitude to LOOT for their continued dedication to PlayStation Home and its inhabitants. Sony Pictures Loot (LOOT) has been providing innovative and entertaining content since 2009.  LOOT’s Living Room Stage Set (released May 7th, 2009) was the first Home personal space created to accommodate machinima work, with its green screens, scene backdrops, camera system, and interactive lighting; LOOT is also renowned for the introduction of their Entertainment On Demand (EOD) service, allowing users to freely stream Crackle movies & TV shows, watch live events from NASA & PlayStation, and listen to internet radio broadcasts all from within PlayStation Home and sharable with friends.

Throughout its time in Home, LOOT has also orchestrated a variety of fun prize-winning competitions challenging participants’ creative skills, such as machinima development or quote contests. The awards for these competitions have been more than worthwhile, with past prizes such as their EOD TV or internet radio collections, personal spaces, and real movie posters. 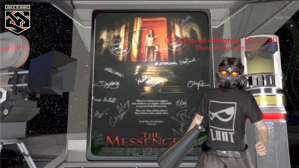 In commemoration of all LOOT has done, we celebrate to their continued success.

After we docked and disembarked our vessels at the entrance to LOOT’s Space Station 2.0, our night began.  First up was the header photo-op with all members sporting the LOOT t-shirts and tops. Next, we played our usual Friday favorite game of Four Corners.  Round One was won by me, Orpheo of Third Division.  Round Two went to Richard of First Division, who was also last weeks Four Corner MVP.  Round Three was won by Slayer of Second Division.  It was at this point the game went into Sudden Death; after a brief battle dictated by chance, Slayer slew the competition to emerge as the nights’ victor and this Friday’s MVP.  Congratulations Slayer and congratulations to Second Division.

( Left to right ) Richard, Orpheo, Orga and Trunz holding down the lines at corner three.

Concluding our game we took a tour of the surroundings.  LOOT’s Space Station 2.0 is a very wide space with a central hub connected to a series of smaller hubs.  What is really impressive about the space is a set of small spherical rooms reachable from within the central hub which are all differently themed; they’re easy to miss so look for the writing on the wall to find them.  After sharing a few more laughs and some good conversation we bid farewell to LOOT’s Space Station and returned to the stars.  Our next destination?  Who knows?  We’ll chart a course for the second star to the right, and head straight on till morning. 😉

Be sure to visit and like LOOT’s official Facebook page and Twitter to join in on all their exciting contests and return here next week to see what new adventure we embark upon next, Guns of the Helghast wish you well! 🙂

3 responses to “Guns of the Helghast: Commemoration at LOOT’s Space Station”