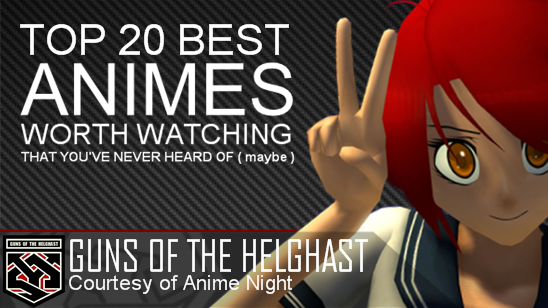 Summary: High schools on gigantic aircraft carriers host electives called “tankery”. Tankery is the art of piloting tanks. In this universe tankery is the equivalent to a school elective. A young girl and her friends enter in competitions and go against other high schools and want to win to gain credits for school an bring honor their school as well. Name of the game? Knock out the other tanks.

Cons: Some main characters are kind of bland, certain episodes drag on about the same topics. 19. High School of the Dead

Pros: It has zombies, a look in the mind of government if a zombie apocalypse would occur, excellent character personalties, the squad of children all have the unique skills to survive, it’s realistic.

Cons: TOO much fan service

Summary: A young boy who’s obsessed with fantasy and games witnesses a murder is being hunted by an unknown serial killer that pins his victims to walls using knives.

Pros: The main character is hilarious, the serial killer is menacing, the mystery drives the story.

Summary: A young girl is attacked by a a vampire and she learns she is the only one who can defeat them. She then travels around the world ridding the world of this vampire disease with her friends and family.

Summary: A medieval island where humans are plagued by humanoid shape-shifters known as Yoma that feast on human beings. A mysterious group, known as The Organization, creates human-Yoma hybrids to kill Yoma for a fee. These female warriors wear Roman army-like uniforms. The calls them “Claymores.”

Pros: It’s an icredible story, great scenery and amazing detail in the backstory of characters.

Cons: It’s a little repetitive with the killing of the Yoma.

Summary: A new kid moves into town and he enrolls into an assumingly normal school. Just a few days after he enrolls, he learns of a curse that takes the lives of his fellow classmates and he takes on the mission of finding out why all these mysterious deaths are occurring.

Pros:  Great characters, it keeps you guessing, Death scenes were hash but so deliciously evil.

Summary: A young girl, Tohru Honda’s. mother is killed in a car accident. She moves in with her room mates and we find out she is cursed by spirits of the Chinese Zodiac. The curse states that if any member of Tohru’s member (including her) is touched by the opposite sex, stressed or weak they will turn into their Zodiac animals.

Cons: There are a few plot holes.

Summary: The Neighbors Club is a bunch of people who can’t make friends, so they made the club to teach eachother how to make friends. All the while the club doesn’t realize that they basically become friends. Summary: The story revolves around Mahiro Fuwa, a teenager, whose sister was mysteriously murdered one year prior, and his best friend Yoshino Takigawa. Mahiro is contacted by Hakaze Kusaribe, the leader of the Kusaribe clan who was left stranded on an unknown deserted island by her clans-people, and agrees to help Hakaze in exchange for her help to find out the culprit for the death of his family. Upon learning of his friend’s intentions, Yoshino joins him on his quest to stand against the Kusaribe clan who intends to awaken the “Tree of Exodus” whose power can bring ruin to the entire world.

Cons: There’s not as much action as I thought.

Summary: On one hot summer day in 1983, a transfer student named Maebara Keiichi comes to a peaceful rural village in Hinamizawa. There, he befriends his classmates Rena, Mion, Rika, and Satoko. He gets acccepted as a full-fledged member of the “club,” Keiichi and the gang plays all sorts of activities ranging from card and board games to hide-and-seek. But just as Keiichi was beginning to be assimilated in simple rural life, he stumbles upon the dark history of Hinamizawa. As Keiichi dives deeper into the mystery, he finds that his new friends may not be all what they claim to be.

Pros: Incredible plot, some of the best character development since Cowboy Bebop.

Cons: Some episodes, although they aren’t fillers, have nothing to do with the actual plot.

Summary: Elfen Lied takes place in Kamakura, Japan, focusing on a new strain of the human race, Diclonius, similar to human beings with invisible arms called vectors but different at the genetic level and notable due to physical abnormalities, particularly a pair of short horn-like protrusions. One such Diclonius, Lucy, is the main character of the series: Initially held in a facility built for experimentation, located off the coast of Kamakura, she manages to escape and wreak havoc, but is injured in the process, an event which causes her to develop a secondary, childlike personality known as Nyu. Lucy is found by two locals, Kohta, who studies at the local university, and his cousin Yuka. They take her in, and become involved with the numerous, often brutal, attempts to recapture her by a Special Assault Team and a number of other Diclonius, who shift frequently from oblivious to murderous.

Pros: You get attached to the characters, intense scenes of violence and gore.

Cons: The english dub sucks (Wait for it) ass.

Summary: Gurren Lagann takes place in a fictional future where Earth is ruled by the Spiral King, Lordgenome, who forces mankind to live in isolated subterranean villages. These villages have no contact with the surface world or other villages, and are under constant threat of earthquakes. Select villagers called diggers are conscripted to expand their homes deeper underground. Simon, a meek young digger ostracized by his peers, finds solace in his best friend and older brother figure, an eccentric delinquent named Kamina. Kamina allows Simon to join his gang, Team Gurren, to help him achieve his dream of visiting the surface world.

Pros: The characters are badass, it’s all about will power, never giving up is the reocurring theme of the anime.

Cons: Certain characters that you will get attached to, die.

Summary: The story opens on Monday April 14, 2003 at the beginning of the school year, when Tomoya meets by chance Nagisa Furukawa, a soft-spoken girl one year older than he is who is repeating her last year in high school due to being sick much of the previous year. Her goal is to join the drama club which she was unable to do due to her sickness, but they find that the drama club was disbanded after the few remaining members graduated. Since Tomoya has a lot of time to kill, he starts to help Nagisa in reforming the drama club. During this period, Tomoya meets and hangs out with several other girls who he gets to know well and help with their individual problems.

Pros:  The story will tug at your heart strings, you will get attached to Tomoya instantly, the episodes were always interesting.

Cons: I couldn’t find a thing wrong with the anime.

Summary: It’s about Alucard, a vampire hunter who hunts down and kills the undead, monsters and ghouls.

Cons:  The story isn’t as detailed as the original version and it’s kind of rushed. Summary: In the year 2022, the Virtual Reality Massive Multiplayer Online Role-Playing Game (VRMMORPG), Sword Art Online (SAO) wass released. With the Nerve Gear, a virtual reality helmet that stimulates the user’s five senses with their brain, players experience and control their in-game characters with their brains.

Pros: It’s extrememly promising and it grabs you from episode one.

Summary: The series follows the lives of a group of high school students and their school. Hilarious scenes such as a robotic girl made by a scientist who is an eight-year-old g, a boy who rides a goat to school with his butler and things of that nature. Although it has wacky settings and characters, the students still live normal lives.

Cons: I can’t find a thing wrong with it. Summary: Yūta Togashi is a boy who, during junior high school  believed that he possessed supernatural powers and he gave himself the title of the ‘Dark Flame Master,’ therefore alienating himself from his classmates. Emberrassed by his past, Yūta attempts to start off high school where he doesn’t  know anyone. Long story short an odd character of a girl in his class, Rikka Takanashi, learns of Yūta’s past and becomes “interested” in him.

Pros: It’s a heart warming storythat really captures the essence of being ones-self.

Cons: Funimation bought it and we’re probably not going to see an English Dub. Summary: Lucky Star follows the lives of four japanese females. The main character, Konata would rather play games, watch anime and read manga rather than study and do homework. Konata is a classic otaku and she finds herself in funny situations where she teaches her friends about the otaku lifestyle or pulling pranks on them as well.

Pros: An anime that breaks the barrier and references classic cliches of shonen and shojo anime. It educates you on the classical japanese culture and the otaku culture. It’s the perfect anime for a first time anime watcher.

Cons: It will not appeal to those who are expecting a shonen anime.

Summary: Yuki Amano is a loner  kid who spends most of his time writing in a diary on his cellular phone or talking to his imaginary friend Deus Ex Machina, the God of Time and Space, and Murmur, Deus’ servant. One day, Deus gives Yuki a special diary, he mumbles something about a game. Yuki’s new diary has entries in it from the future up to 90 days ahead. They are entries about the future that come distrubingly true. Deus, the not-so-imaginary God of Time and Space, then forces Yuki to participate in a battle royale type of competition with eleven other “lucky” contestants, each of whom also posses a diary that predicts the future in their own individul way. The rules of this “Diary Game” are simple: the contestants must find and eliminate all the other contestants before the world ends on Day 90, and only the last one standing can prevent the apocalypse and become the new God of Time and Space

Pros: It’s like death note on roids. It has cool contestants and the plot is  pure genius.

Cons: The main character gets annoying after the first two minutes.

1. The Melancholy of Haruhi Suzumiya

Summary: Kyon is a young man who is friends with Haruhi Suzumiya. Haruhi seeks the adventure of finding out alien existence and supernatural powers. She forms a club called the SOS brigade. Shortly after forming the SOS Brigade, crazy-weird things start to happen.

Pros: It is the absolute perfect blend of Shonen and Shojo. It will appeal to any anime fan. I promise you’ve never seen anything like it.