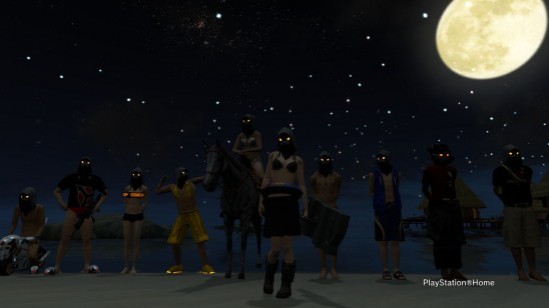 Greetings again from Guns of the Helghast. 🙂

August 9th, 2013, Guns of the Helghast held another fun Friday event.  Join us, won’t you, as we recount in brief our tale of revelry and relaxation.

Colonel Champ of the 1st Division hosted last Friday night’s events.  Having not been there in a while, it was decided that Guns of the Helghast would re-visit Granzella’s Glittering Sands Beach, but this time at night.  Ahh, what a beautiful sight to behold.

The greatness of the glowering moon,
Hung center-sky like night at noon.
With stars in tow they blessed the land,
Showering softly upon silvered sand.
Their gentle hue laid bare before the billowed dunes,
Pleased the revelers, celestial boons,
While others relaxed to the sea’s sweet croon.

As always our first objective was to line-up along the shore for a commemorative picture, as seen in the header image above, a souvenir of the fun to come.  Afterward Colonel Champ declared a day of freedom and of fun, to let us run random beneath the nighttime sun.

Guns of the Helghast enjoyed the beach’s cool waters as we splashed about in revelry or rode the gentle waves upon our floatation devices.  We talked, joked, laughed, and shared fond memories of our past adventures.  We also got a chance to catch up with each others day-to-day lives; after all we’re more than just a club at GotH, we’re friends. 🙂 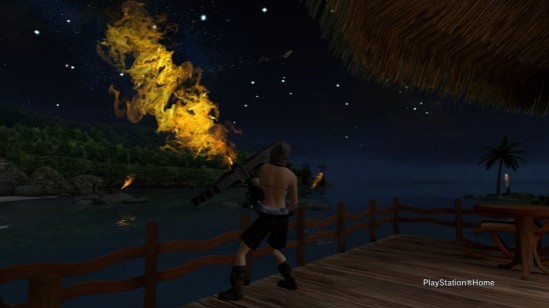 Next we claimed by Helghast might the rocky isles for the night as we blazed our flamethrowers about the beach.  Our comrade in the foreground was careful not to catch fire to the pier or straw hut you see in the shot above, safety first.  We had such a good night last Friday just relaxing, chatting, and playing around that we nearly lost track of time. 🙂  It’s good every once in a while to take a break from our standard occupations or more rigid events and just let loose a little. 😉

A big thanks goes out to Colonel Champ and to Guns of the Helghast in general for hosting such a great event.  Thanks also to Granzella and PlayStation for letting us play in their world while we live in ours. 😉

Join us next Monday, August 19th, 2013, for coverage from our next Friday event.  Guns of the Helghast wishes you happiness and hope. 🙂

One response to “Guns of the Helghast Grace Granzella’s Glittering Sands… At Night!”